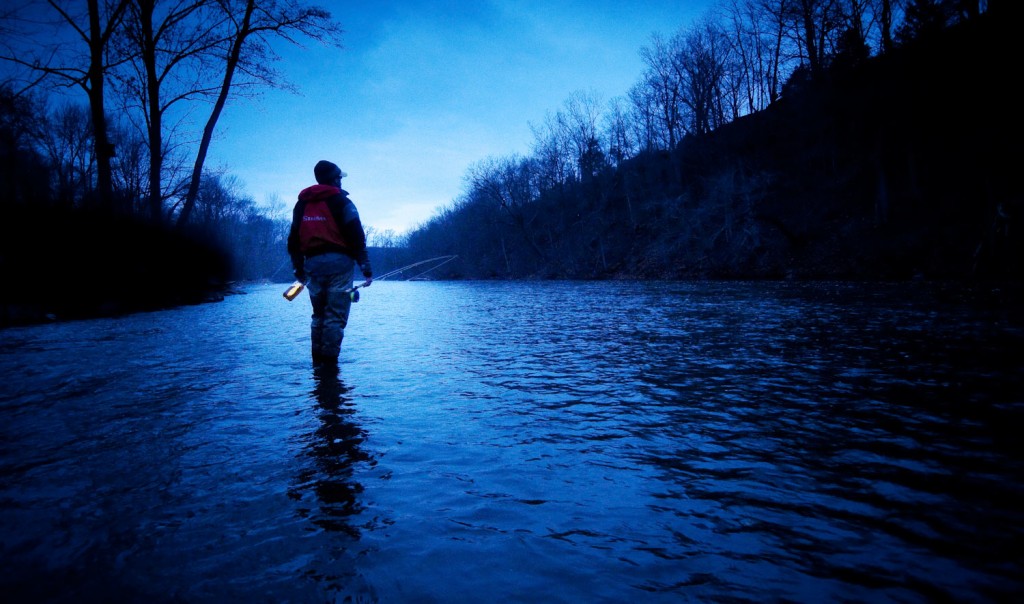 Standing in the River Carrying a Torch

A different kind of love story.

Men and fish parted ways a long time ago. You couldn’t call it an amiable divorce. The fish got everything. The mountain streams, the lazy winding rivers, the deep blue sea, everything. Men had to pack their bags and crawl, with their heads hanging, out onto the land and they were not happy about it. They learned to breathe air and walk on two legs but they never stopped dreaming of swimming in the dark oceans, nor of the long and lovely fish that had sent them packing. They thought about fish all the time. They made their homes near the water and lurked around the shore, peering into the depths. Men wondered if the fish ever thought about them. Probably not. They saw fish from time to time, sliding gracefully through a pool or leaping a waterfall. They seemed happy. They seemed to have moved on, forgotten about men altogether. Men knew they should be happy for the fish, but they weren’t. They were bitter and moody and often cried at night. Men invented alcohol and that helped. It didn’t take their mind off of fish but liquor is a good listener and it doesn’t judge or mind if you cry.

“Who needs fish, Fuck ’em”, men decided. They turned their back on the water and went to the woods and found animals and for a while it took their mind off of things. They stalked and chased and laid in wait and for a while the pretty little deer were fun, but in time those big black eyes just seemed empty. Men had nothing to talk to deer about. Try to explain to deer about the ocean, about gliding through the waves, your body taut and glistening, one with the current. Deer don’t understand what it feels like to rocket up from the depths and break the surface, breaching in defiance of all things that would have you, only to disappear back into the depths. Deer don’t know anything. Eventually these encounters became bitter and joyless. There was no more stalking and chasing, no more lying in wait, just that vapid look in the headlights and the thud, thud under the wheels. Again, men found themselves staring at the water.

Men decided that if they couldn’t swim, they would fly! “Let’s see fish do that” they thought. They made airplanes and took to the sky. They soared and swooped. They glided through the clouds but when they looked down, there was always water. They built better planes. Planes that would take them higher and farther, high enough that they didn’t have to see the water anymore. Men flew to the moon. They played golf there and drove dune buggies and it was fun, but when they got back someone noticed that all the photos they had taken were of the Earth. There it was in every photo. That beautiful blue ball with those deep seductive oceans. Men went back to the moon a few times but got bored with it and stopped going. Golf just wasn’t man’s game.

It was no secret to anyone what was going on. Even the deer could see it. Men would mope around all week, hardly talking to anyone but liquor. Faces long and attitudes surly. When the weekend finally rolled around it was the same old story. There they were, standing in the river like fools, cold, socks soaked through, trying just to catch a glimpse of fish. Hoping, maybe this time fish would be feeling nostalgic and maybe be thinking of men. They had good times too, right? Men weren’t all bad. Maybe this time fish would let men stay. Maybe for the night or even just for a drink. That would be a start, but it never happened. Sometimes fish were there but they were never happy to see men and didn’t hang around. They didn’t even say hello. Their eyes were cold and they didn’t smile. Men would go home, their socks wet, and look at their old photos of the ocean and cry to their liquor.

Men will always love fish and to love must be it’s own reward. That’s just the way it is and that’s the way it will stay. Love is love. It can’t be reasoned with or controlled. It doesn’t make bargains. It doesn’t apologize. It is as unyielding as the river and as moody as the sea. Fish will know what it is to swim and men will know what it is to want. That’s just the way of things. Men are coveters, full of wishes and regret. Dreaming of how things were or should be. Fish are beauty and grace, power and speed. They are both Eve and Eden. They live in the home of our unrequited love. For love is a river and fish are the current. Men only stand in the river and dream.